Archives for the ‘Home Inspection’ Category 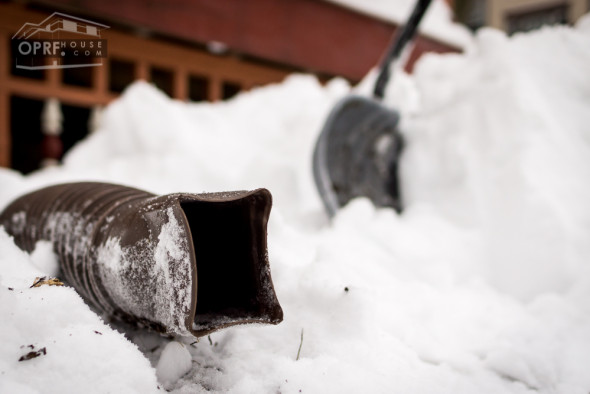 For those of us in the Midwest, one of the many forms of “a perfect storm” for basement flooding is setting up right now.  No, we are not expected to get the 5th “100yr Rain” in the past six years.  Yet… rain is coming.  We have just come off days of sub-zero temps and we have at least a foot of snow on the ground.  The temperature is rising… the snow will be slowly melting… the rain is going to begin.  What is the problem?… Our gutter downspouts, sump pump tubing and sump pump bubblers are covered in snow.  In addition, although the temperature is rising the many inches of top soil are frozen.

The snow on our roofs will begin to melt and melt fast.  The rain water that falls will have no soil to soak into.  The snow that melts will have nowhere to go.  All this water will take the path of least resistance and history tells us that path is to your basement.

Aid the flow of water away from your home by digging out your gutter downspouts.  Even if your downspouts run into the municipal sewer system, clear these areas where the downspout goes into the ground.  If you have a really fancy system it is possible your downspouts go into the ground but the tubing leads to a “bubbler” somewhere out in your lawn.  The bubbler looks like a large (usually green) oversized golf course sprinkler head.  When water flows out to the bubbler the top cap floats up and releases the water spreading it out over your lawn.  These bubblers should be located and snow/ice cleared with as large a diameter you can.

For those of us with sump pumps we need to dig out the ejector tubing if the tubing exits the house and dumps onto the property.  It is possible that there is frozen water already in the tubing.  By digging out now and clearing the snow and ice away from the tubing you might be able to facilitate thawing as the air temperatures rise TODAY.   Many of you also have your sump dumping outside into tubing that terminates in a bubbler in your lawn.  Clear these.

In any event… do NOT be a passive homeowner today and this weekend.  Just like during the deep freeze of the beginning of this week you checked frequently that your furnace was running, the house was heated and you may have even occasionally checked for leaking or bursting pipes.  I know many of you unfortunately found those leaks.  Now we need to be a different kind of diligent. 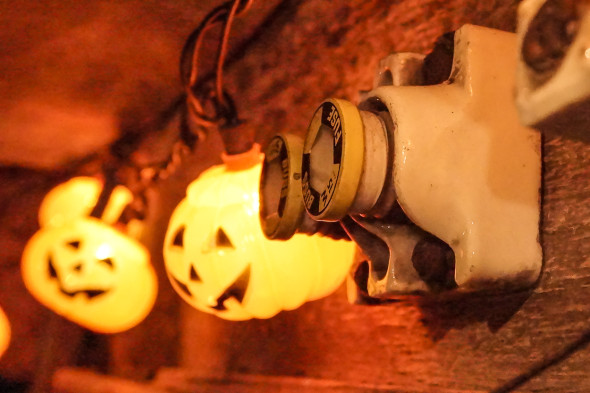 This is a photo project on knob and tube wiring; a form of electricity delivery of days old.  For some reason, I have seen more knob and tube wiring this year than in any other of the past 14 years… combined.  (If you read my “About” page you would know I am a full-time residential real estate agent in Oak Park/River Forest, Illinois.)  To stress to you the danger of knob and tube I have purposely given this project… shall we say… a seasonal theme.  Hope you like it. 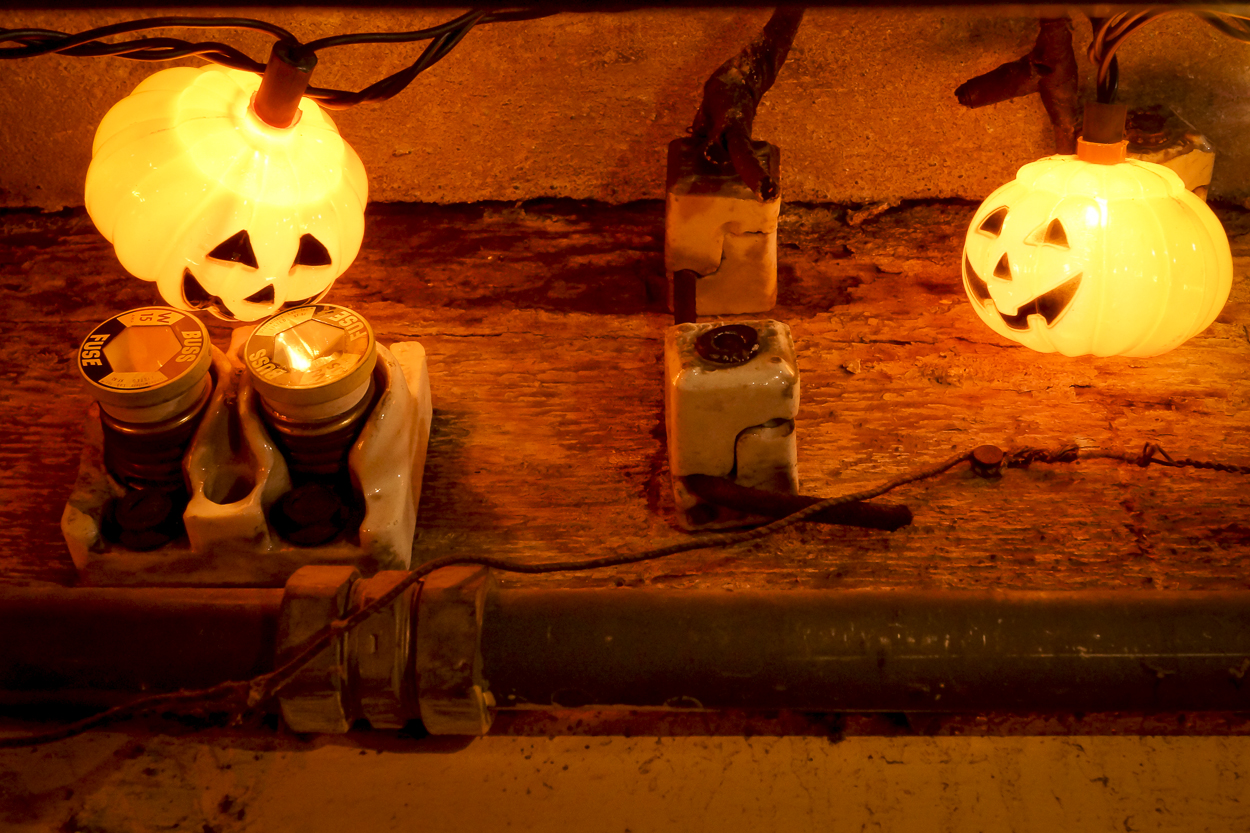 Here is a photo of some of the ceramics that I found in my Victorian (c.1891) in Oak Park before I removed them for the below photo.  This wiring is located in my basement.  They were attached to one of the main support beams.  Notice how the traditional knobs (round) were not used in this location.  These square shaped wire holders were called “cleats” and to the left is a ceramic fuse box.  From what I have read, this fuse box could possibly have been a neutral fuse; a fuse that when it blew due to overload still left a live hot wire somewhere in the system!

So what is Knob & Tube Wiring, anyway?  Simply, knob and tube wiring is one of North America’s very first electrical systems for building structures.   Most commonly used in these parts from about 1880 to the 1930’s, knob and tube (aka K&T) remained an inexpensive form of electrical wiring even as newer safer technologies developed.  In the early 1900’s as electrical wiring techniques improved, K&T was half the cost of covered or protected (in pipe) wiring systems. 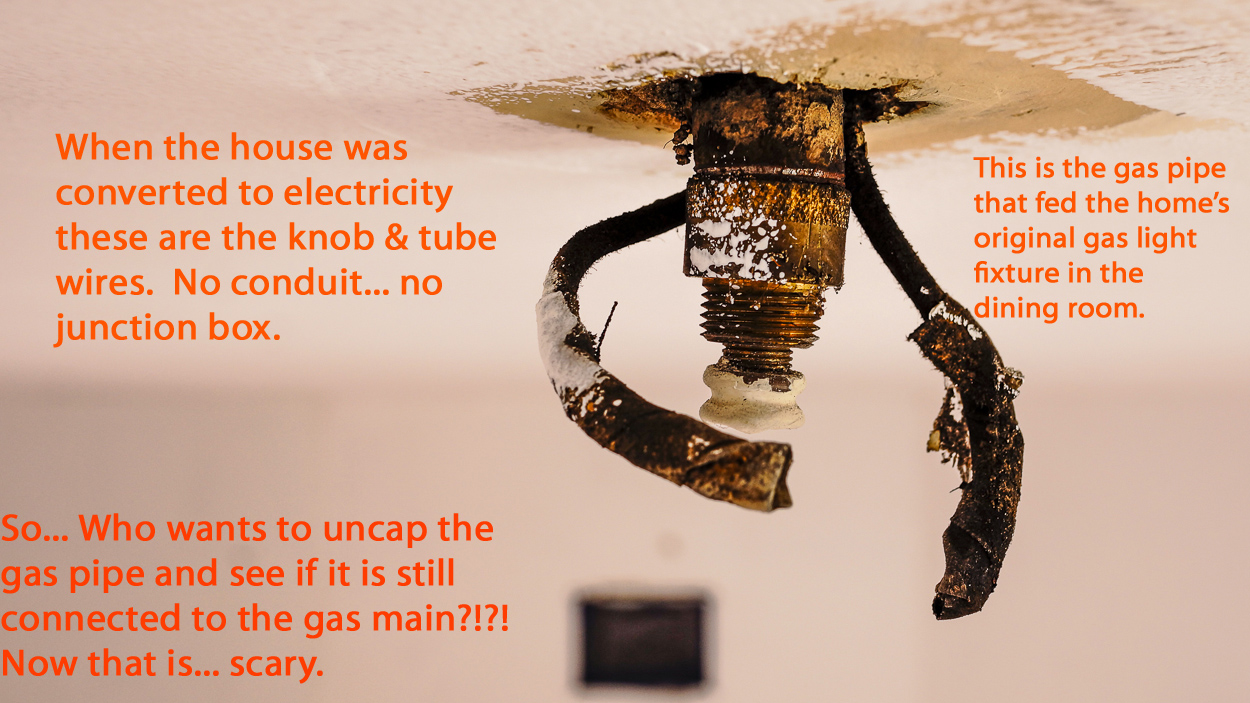 So the above photo is really scary.  Yes, that is what we discovered in the original plaster ceiling when we removed the false ceiling this year.  The home’s original lighting was provided by gas fixtures.  Brass gas pipes were throughout the home feeding various fixtures that burned for light.  When electricity for homes came along (knob and tube) it was easiest to fish the wires along the same path as the gas piping.  You need to be careful with these gas pipes if you find them in your walls for they could still be connected to the homes gas main.

The name, “Knob & Tube”, refers to the fact that the system utilized ceramic “knobs” (mostly round) to wrap coated wiring around and then run to another knob where the wire may have made a turn and then run to another… until it reached its destination of a light fixture or switch.  The knobs have holes in the center.  The knobs would be hammered with long nails into floor joists, building studs within walls before the plaster was installed, or on roof joists in attics.  When you needed to get a wire through a piece of wood in the building’s structure then the electrician or home builder used ceramic “Tubes”.  The craftsman would drill a hole in say a wall stud, place the ceramic tube in the hole and then run the coated wire through the tube on to its next destination.  Basically, the ceramic tube is protecting the wood from being touched by an unprotected electrical wire. 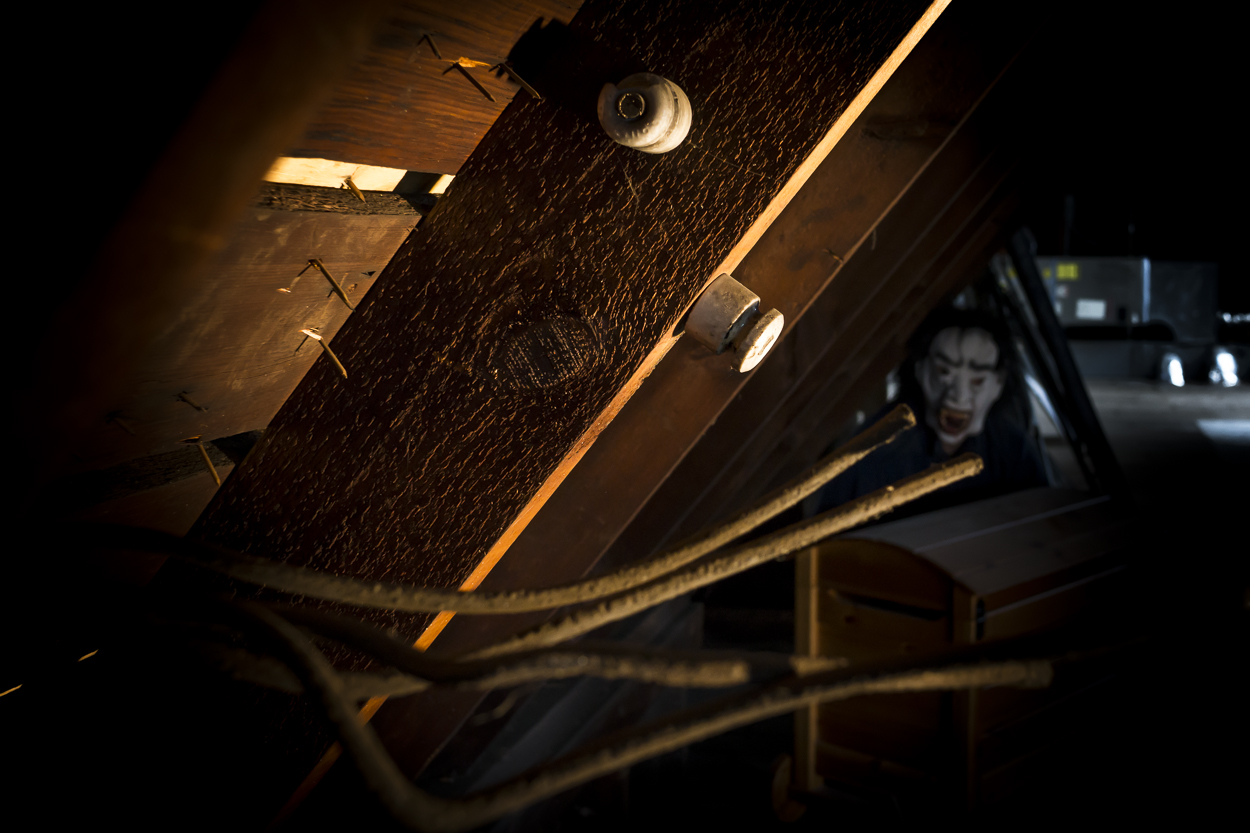 I found these traditional knobs in my home’s attic.  The attic kinda creeps me out.  you know?… like you are not really alone?  Anyway, what is even more interesting are the protruding wires.  See them?  This is most likely the central electrical feed.  The main would have entered the house from outside up into the attic.  Then the main was split off into several branch circuits and snaked throughout the home. 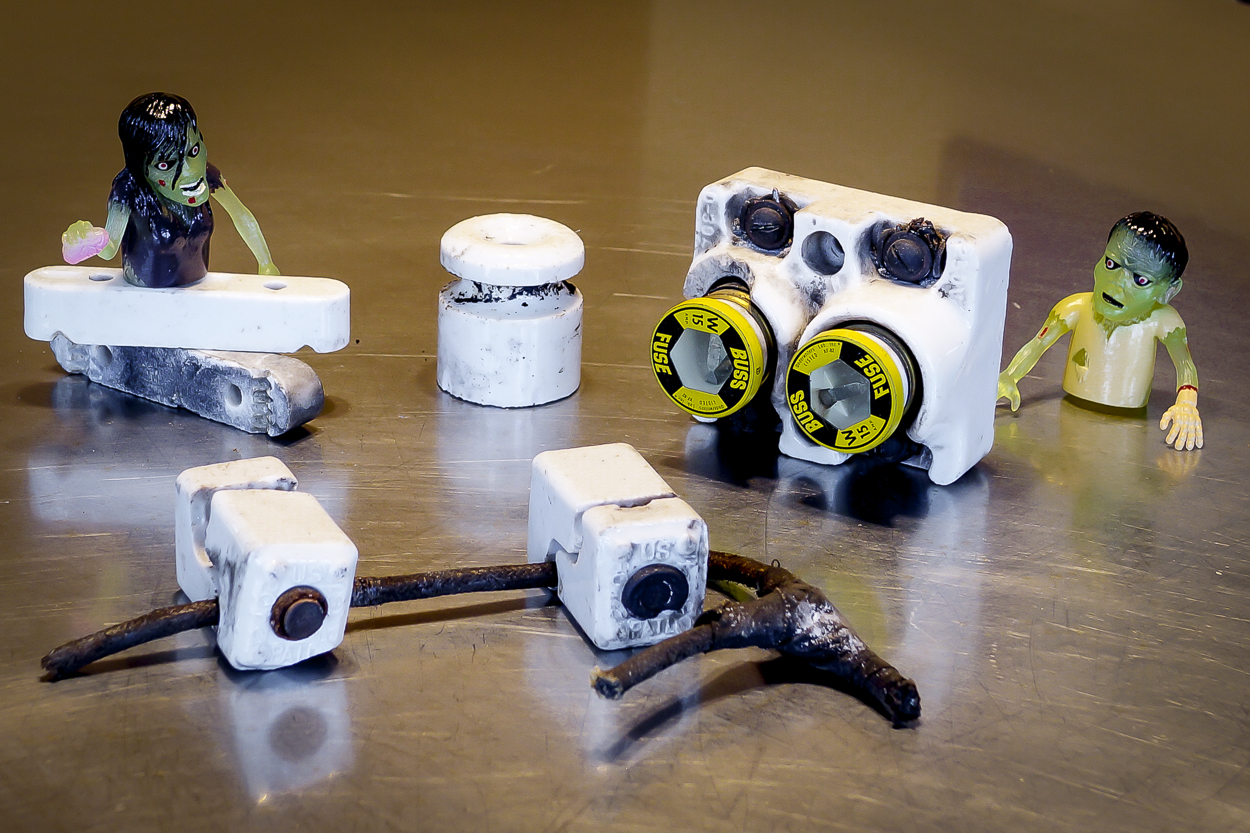 OK, Steve, what’s with the little scary characters.  Those are actually finger puppets I got at Pumpkin Moon in Oak Park.  These photos I use the puppets in are a “hat tip” to a very awesome photographer out of Italy, Luca Rossini.

So why is it (knob & tube) SCARY!?!?!?!  Well, it is very scary to have this type of wiring still existing in a home as a source of electricity.  Chuck Allen, a licensed home inspector for National Property Inspections, serving the Chicago area, ,tells me K&T wiring is dangerous for a number of reasons.  “(Wire) insulation becomes brittle and falls off exposing energized wire.  Energized circuits may prove hazardous to human health (electrocution) and in some cases poses a real fire hazard since the connections of wires is generally loose and can arc.” says Allen.

This type of ceramic K&T fixture is called a cleat.  It is just another form of wire anchoring and feeding within a home.  I found cleats used in my open unfinished basement area only.  Look at how long that nail is.  And look closely at the nail head.  That is a type of clothe padding used under the nail head so that it didn’t damage the ceramic.

Now, my own home had K&T wiring when we moved in the house in 2000.  We immediately had a professional electrician (Ron LaRosa of R&L) come in and clean it all up.  But here is something Chuck told me I was never aware.  This old form of transmission of electricity around the house relied on the air gaps in the walls where the wires ran to provide additional cooling for often overloaded circuits. As a real estate professional that is around old homes everyday this means you better make sure you have no live knob & tube when you go to blow in insulation in your old home’s walls.

This is a classic shot of the wires running through the ceramic tubes.  The tubes protect the wire from rubbing up against the wood and possibly causing a fire.

For those out there scared of old homes take a look at this. “What the heck am I looking at, Steve?” you say. Well this home was built in 1899! We are situated on the outside north side of the house with 3 layers of siding removed… the original clapboard, a layer of asphalt siding (c.1940) and the current vinyl siding. This view reveals the actual sill plate (solid horizontal wood plank that sits on the top of the foundation aka “mud sill”.) a 2×6 run of wood. And we are talking a real 2inch by 6inch. Today’s “2×6” actually measures 1.5”x5.5”. The condition of this sill is amazing after more than 100 years! Moisture is detected but no rot whatsoever! Put the siding back and re-grade the dirt keeping moisture away from the house and we are good. Now see the vertical members that go up from the sill? These most likely run as one solid continuous piece of wood (stud) all the way the 2 stories of the house! Cool, huh?!?! END_OF_DOCUMENT_TOKEN_TO_BE_REPLACED